The Heart of Asia Society (HAS) and Kakar Historical Foundation (KHF) launched the publication of two books: “In Search of Peace for Afghanistan” and “تلاش افغان ها برای صلح” on May 3, 2021 at Afghanistan Center at Kabul University (ACKU).

The event was conducted in the form of a dialogue and Q&A with distinguished panelists including politicians, academics, and peace negotiators who discussed the contents of the book, and casted their views and thoughts regarding the Afghan peace in the past and present.

The panelists retraced the trajectory of peace processes in Afghanistan’s past during the 1980s and 1990s and shed light on the similarities and divergences between the peace processes during the People’s Democratic Party of Afghanistan (PDPA) era of Dr. Najibullah and the present peace process. The comparison between two historical periods mainly focused on the underlying conditions related to the warring parties – in particular Dr. Najibullah versus the Mujahedeen back then, and Dr. Ashraf Ghani versus the Taliban in the present.

First, the panelists highlighted the similarities; according to them the challenges and constraints to peacemaking during Dr. Najibullah remained intact today. The Soviet Union left Afghanistan without any transitional settlement, and likewise the US’s “unconditional” exit and a lack of prospect for a political settlement with the Taliban leaves Afghanistan vulnerable to the menace of a civil war. Meanwhile, the regional and global powers supported the Mujahedeen, which is also true to Taliban who have gradually attracted more support from the countries in the world. For both Mujahedeen and the Taliban, regime change and the establishment of a new political system remained the end states. With regard to regional and international consensus on the peace in Afghanistan, it has been lacking in both eras and bringing peace to Afghanistan has never been a priority for the world and the region alike. 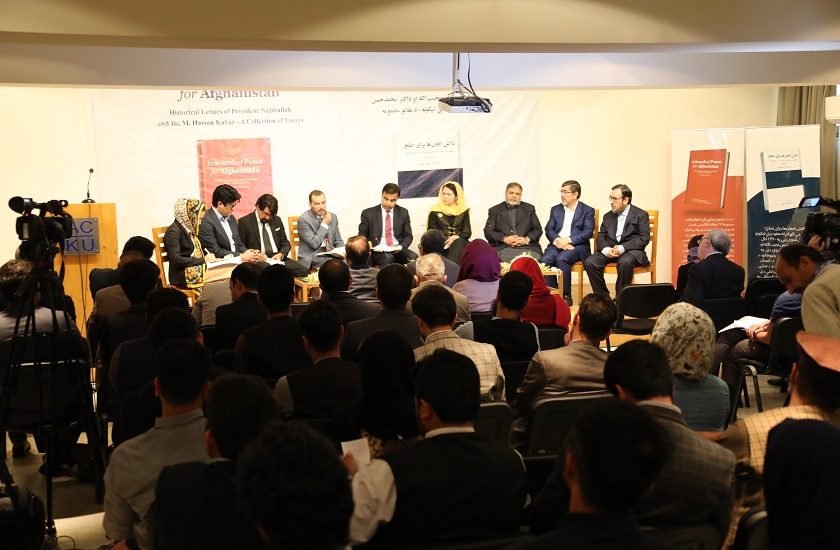 Second, the discussants pointed to a number of divergences between the two periods – the Mujahedeen were divided and fragmented into Shia and Sunni parties, in contrast to Taliban who have so far portrayed more cohesiveness and unity. Moreover, the public opinion is more in favor of retention and preservation of gains and the current constitutional order, as opposed to the post-Soviet era in which the people wanted change and reform of the political system that was installed by the Soviet Union. During Dr. Najibullah’ era, the army had robust ground and air warfare, they however lacked enough human capital to fight. The current political system is internationally more recognized and financially supported, while Dr. Najibullah’s government was not. State institutions were undemocratic during the PDPA, in contrary the current institutions are more democratic.

In the concluding remarks by the speakers, it was highlighted that the Afghan public have consensus on the peace process, while the Afghan elites failed to reach to a common understanding and a single draft for a peace agreement with the Taliban. According to the speakers, a political consensus among Afghan politicians including those within the state and outside the state is crucial for the success of peace.