The Heart of Asia Society (HAS) and the Institute for Strategic Studies Islamabad (ISSI) hosted an Afghanistan-Pakistan Track 2 dialogue to discuss bilateral relations and the Afghan peace process. Honorable Sayed Hamed Gailani was the keynote speaker. Former officials, academics, and commentators from both sides attended the meeting. 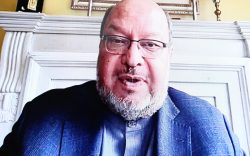 The discussions focused on recent developments in the Afghan peace process and the Afghan-Pak bilateral relations. Participants reiterated that this is another historic window of opportunity for peacemaking in Afghanistan.

Pak’s role in hosting Afghan refugees was noted. Participants concurred that a deal should not be imposed on Afghans from the outside. Instead, participants emphasized that solutions must come from within Afghanistan that reflect the needs of the people and the political realities of the country. The process should be Afghan-led and Afghan-owned.

For Afghanistan, the issue of violence and the suffering of ordinary people remain a top concern. It was emphasized that ceasefire or at least significant reduction in violence must be an immediate priority in the peace process.

It was underlined that both countries must focus on economic development. Participants agreed on the vital role of expanding trade and transit trade bilaterally and at the regional level and underlined the need to fully depoliticize economic ties.

This series of Track 2 dialogues co-organized by HAS and ISSI will continue in the months ahead.